What Do Men Find Attractive In Women?

What exactly do men find attractive in women? Is it their hip ratio? A particular hair color? Do their long legs look in heels? Or maybe it’s all about their positive personality traits?

Fortunately, we don’t have to guess. There have been a lot of studies conducted on this topic and they have given us plenty of insights. It’s important to note that personal preference exists. But there are some things the majority of men find attractive in women no matter their specific taste. Surprisingly, sometimes it is not even intentional. Some things attract men toward women without them even noticing or understanding why.

In this article you will learn:

If there is one thing that men find interesting, it is a woman who flirts with them.

And that is of course not surprising.

Imagine you meet a very nice man and you start talking to him. But over time, he hasn’t given you any indication of interest…

Not only is it annoying because you don’t know exactly where you stand, but it’s also important that you occasionally flirt with the guy you have a crush on.

This is not only because men like flirty behavior. Most men are not very good at picking up unconscious signals.

The more you flirt with him, the sooner he will realize that you like him and the better this will work out for you in the longer term.

Because men love to be considered important and want to be appreciated. The more you flirt with him, the more you invest. This makes the man in question feel appreciated by you.

Obviously, this doesn’t mean you’re flirting with him 24/7, but showing flirtatious behavior on a regular basis is something that is highly appreciated by most men.

I will help you with this exactly how flirting should be done?

Ever had a conversation with someone who constantly looked away while you were talking?

Research shows that eye contact is important for several factors in non-verbal communication.

In addition, eye contact is extremely attractive for men as well as for women.

Keeping strong eye contact radiates self-assurance and you immediately show interest in the other.

In addition, many men already think women’s eyes are beautiful in their own right, so give him the opportunity to look into them.

If you look at him longer than usual while talking, it also increases the sensual tension between you and arouses some attraction.

You understand, of course, that constantly staring into someone’s eyes in an intimidating way comes across as creepy.

Because to prevent it, you can occasionally look away, preferably when you are speaking.

But watch out for this.

Occasionally break eye contact during the conversation by looking to the side.

If you break up, it can come across as if you don’t find it interesting. Looking down can indicate shyness or insecurity.

So look him in the eye in a cheerful way and occasionally break off contact to the side.

Have you ever noticed that it is more common for older men to have a slightly younger girlfriend?

This is because most men like playfulness and youthfulness in a woman.

A cheerful woman creates cheerful emotions in the man.

Of course, this does not mean that from now on you have to take it with you to the playground every time?

It is mainly about appearing cheerful and energetic to him. Tease him a little, play a game with him now and then, and bring out the child in you again.

Not only will the man in question find this very cute about you, but it is also fun for yourself! Children generally laugh 300-500 times a day while adults laugh about 15-20 times a day!

So a man only likes it when you bring some joy into his life.

From now on I would like you to remember the abbreviation “AA”, especially when dealing with men.

And I’m not talking about those very sweet sports drinks?

In this case, AA stands for attractive touch.

Various scientific studies have shown that touching has many benefits. People who touch others a lot are generally considered to be more intelligent, attractive and confident.

Men also like it when a woman dares to touch them. You can do this in the following ways:

5. Every Man Likes A Challenge

When’s the last time you delivered a fantastic performance that you were extremely proud of?

This can be, for example, a diploma, or a certain prize that you have won or a goal that you have set for yourself and whatever you have achieved.

Whatever it is, I’m proud of you anyway?

What matters most is the positive feelings you get when you have accomplished something important.

You probably don’t cheer every time you go shopping.

(Although I am always super happy when my fridge is full again, but that’s another story ?)

But if you get a promotion at work, that is of course cause for celebration. This is because you have had to work harder for it.

It is the same with men. Men love dealing with women who are somewhat of a challenge.

So he can do his best for you ?

You can do this by subtly teasing or distancing yourself from him every now and then. It is best to stay in touch for a day or meet up with your friends now and then instead of with him. After all, you also have your own life.

However, beware of this…

Playing extremely hard to get is counterproductive. If you are constantly flirting with other men, you keep canceling the date or instead of teasing him structurally and cracking his ego, I fear it will end soon.

Like many other men, I am a huge James Bond fan.

In the 1960s, as James Bond emerged as a film phenomenon and became extremely popular, an interesting statement about the secret agent appeared in the media:

From saving the world to picking up the most beautiful women: James Bond can do it all.

Many men would also like to be such an all-rounder?

You can use this to your advantage by caressing his ego and making him feel special. Men love to find a woman who looks up to them.

Laughing at his jokes or asking for help and praising the aforementioned are a guarantee of success.

Make it clear what you find so attractive about him and why he is special to you.

Alternating these compliments with some teasing jokes from time to time creates emotional stimulation which is a great recipe for attraction.

And that is always a bonus?

After all, don’t all men win being your James Bond?

There are also certain signals that men like that are more focused on the subconscious.

I also call these signals under the radar signals. These are small, subtle things you can do that men find attractive.

This statement certainly applies to dealing with men. If there is one thing that men love about a woman, it is intelligence.

If you come across as intelligent, you create space for depth, which ensures that the relationship between you and the man of your dreams does not remain superficial.

In addition, it has been proven that intelligent people are seen as more attractive. So a lot of advantages?

You can appear intelligent by simply reading now and then or delving into certain topics. Keeping an eye on the news now and then does not hurt, so that you stay up to date and are aware of recent developments.

What also helps a lot is asking him questions. This may seem counterproductive, but intelligent people ask a lot of questions to understand things better.

In addition, you arouse his interest by continuing to ask questions, which is beneficial for both of you?

Just watch out that you don’t become a know-it-all, men (and people in general) don’t like that.

You’re not his schoolteacher and you don’t have to hang out with his mother, but caring behavior is something many men love about a woman.

Caring behavior has been in it since prehistoric times.

Men were looking for a caring partner to keep their offspring alive.

Fortunately, healthcare today is a lot better than it was then, so that makes a difference?

Nevertheless, caring is still an important feminine quality for men.

Wiping his mouth, straightening his tie, or preparing healthy food when he’s sick doesn’t hurt at all?

Not only touch or intelligence but also laughter is an attractive trait. Men not only love smiling women, but laughter is both a visual and an inner weapon to achieve the man of your dreams.

-Inside because even putting on a fake smile can help you feel more positive.

And positivity is an incredibly important trait for both men and women. No one is attracted to an ever-negative grumpy.

We have now discussed 10 inner things that men like about a woman.

Men are visual beings and so are attracted to things they can see.

So if I said appearance is not important, I would be lying.

Good looks are important for every man.

In addition, looking beautiful automatically ensures that you feel better about yourself.

Of course, that does not mean that you have to transform yourself into Victoria’s Secret model. ?

The following tips can already ensure that men also like your appearance:

So, these were 11 things men like about a woman. To achieve the best results, I advise you to combine beautiful inner and outer qualities.

When you discover how these switches work and how you control them, you have the power to make him madly in love with you. 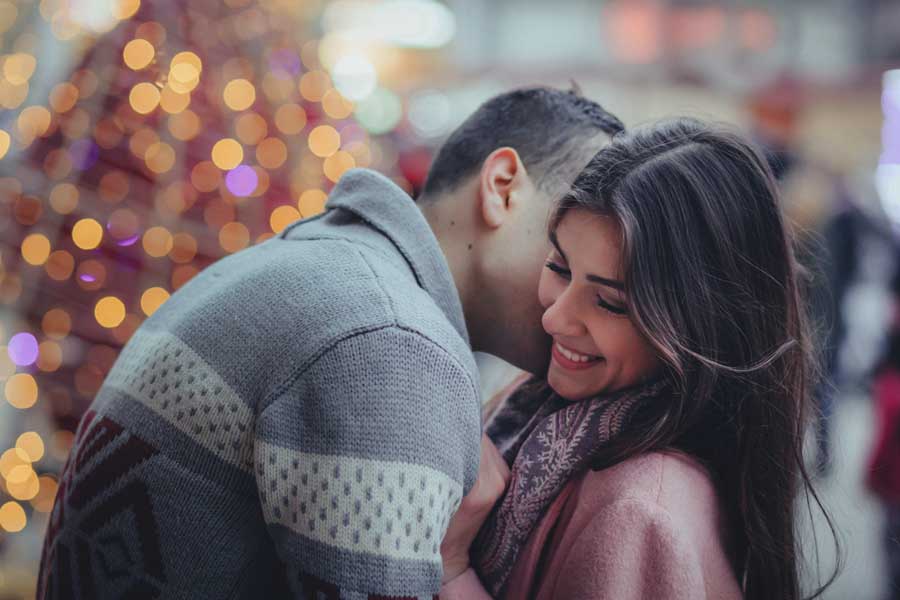